CHICAGO: Prime Minister Narendra Modi has encouraged the entire India to dream big and has shown the world that dreams can be achieved if pursued with determination and persistence, said Taranjit Singh Sandhu, Indian Ambassador to the USA, at the international launch of two books on Prime Minister Narendra Modi at ‘Vishwa Sadbhavana’ event organised by the NID Foundation at the City of Chicago, the United States of America. 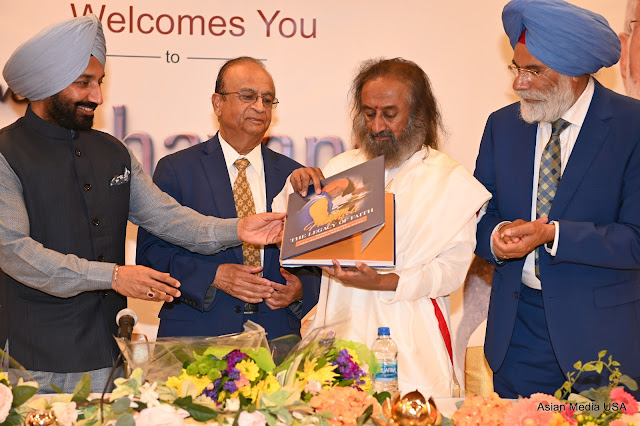 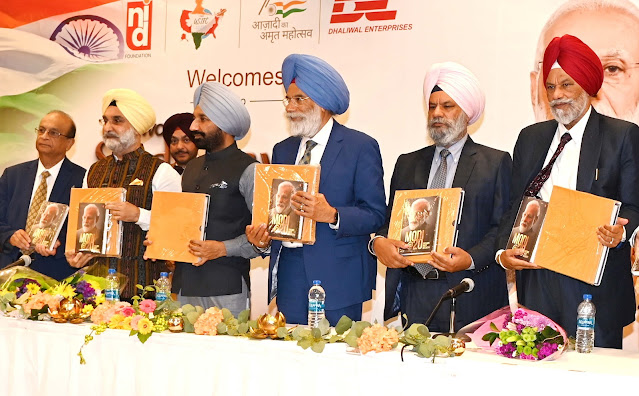 Addressing the gathering, Ambassador Taranjit Singh Sandhu said that Prime Minister Narendra Modi’s visionary approach, his leadership qualities and above all his humility and love for humanity has established him as a global leader in true senses. 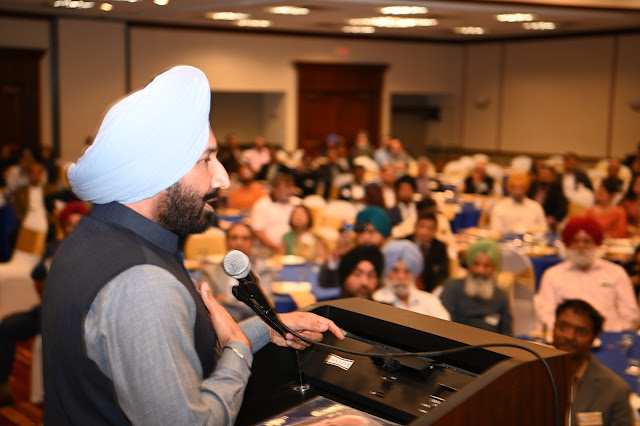 “As the head of 1.4 billion citizens, our Prime Minister has encouraged each of us to dream big. In a real sense, he has gone on and has shown us that these dreams can be achieved if pursued with determination and persistence as seen in India’s rise on the global map. Let us all continue to dream big and work passionately towards achieving those dreams,” he exhorted the members of the Indian diaspora in the audience. 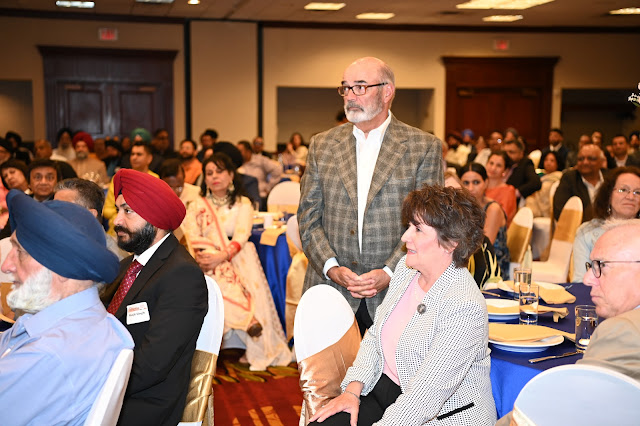 Noting that the Indo-US partnership has only been strengthened with PM Modi at the helm of India’s affairs, Ambassador Sandhu said, “The Prime Minister understands the potential of India-US relationship and has played an important role in building the trust between the two countries. In the USA, the PM saw a very close friend and a strong partner, critical to transforming the dreams and the development aspirations of nearly 1.4 billion Indians into reality. PM Modi has shaped this relationship with his firm vision and showed that tangible outcomes are possible with focussed and regular actions. The United States has designated India as a Major Defense Partner, which is the basis for our strong collaboration in Defence and strategic sector. India and the USA do more bilateral military exercises with each other, today than with any other country.” 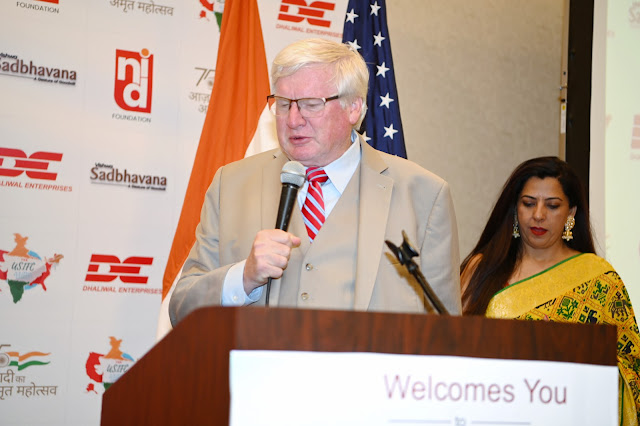 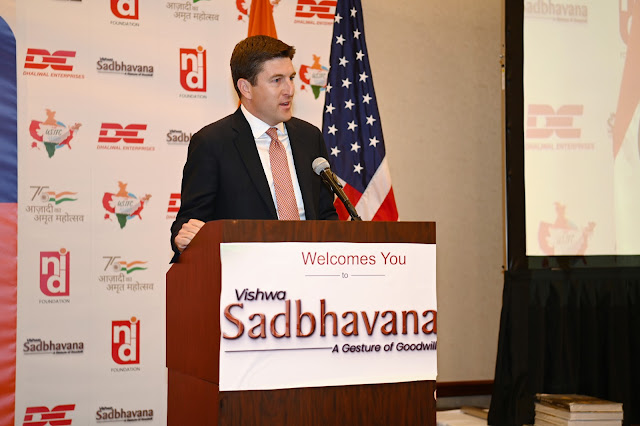 “India’s defence trade with the USA which was 0$ in the late 1990s is now more than $20 billion in 2022. Similarly, our energy trade which 5 years ago was 0$, stands at $20 billion today. Last year, we hit a historic high of more than US $160 billion in India-US bilateral trade. It is beyond impressive that we were able to achieve this during the Covid-19 pandemic without any formal trade agreement and despite supply chain disruptions,” he added. 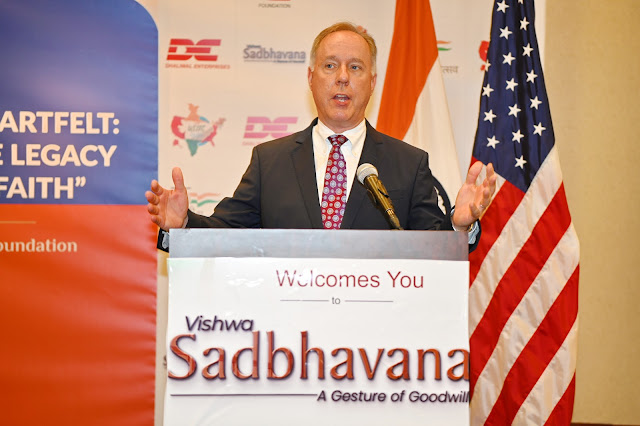 Noting that India of the present is the country of young people, Ambassador Sandhu said, “50% of nearly 1.4 billion Indian people are 26 years old or below and they are the best friends of the USA in India, because these young people have positivity and energy. They look at the USA in a very positive way. More than 2,00,000 Indian students are studying in the USA and 2/3rd of them are in the STEM areas, bringing unmatched value and strength to the USA.”

Ambassador Sandhu said that Modi has been impacting the global decisions in developed nations and at the same time been the strong voice of developing nations.
“Be it the act of providing the entire world with Covid-19 vaccines, relief missions in countries such as Afghanistan or hand holding nations in education or space research; be it his stance during COP26 Global Leaders' Summit in Glasgow or during World Economic Forum’s Davos Summit, Narendra Modi has truly shown the world the way forward,” said the Ambassador.

Brought out by NID Foundation, the book ‘Heartfelt-The Legacy Of Faith’ documents Prime Minister Shri Narendra Modi Ji’s belief in the Sikh Guru’s and their teachings, and his earnest efforts for enabling justice and prosperity and delivering upon the long-overdue mainstays of the Sikh community. The other book, ‘Modi@20: Dreams Meet Delivery’ by famed Oncologist in America Dr Bharat Barai, is a compilation of chapters by intellectual and domain experts, providing with an expansive exploration into the fundamental transformation of Gujarat and India over the last 20 year due to his unique kind of Governance.

First to be organised offshore, the Vishwa Sadbhavana was the latest in the series of such events organised by the NID foundation and picks up from the legacy of last event held at New Delhi in April this year, wherein a contingent of 138 highly decorated Sikhs from India and abroad met the Hon'ble Prime Minister at his official residence.

In his address, Gurudev Sri Sri Ravishankar said that Sadbhavana means wellness, well-being, and uniting people and Sadbhavana is what this world needs the most today.

Hailing Prime Minister Narendra Modi for various initiatives taken by him in the past eight years, Sri Sri said, “India has gone under a sea of change. From infrastructure development, to attending to the poorest of the poor sections of the society, from the ease of doing business and many other initiatives, the progress and development undertaken by the Prime Minister are phenomenal. I appeal to those of you who have not visited India in the past few years, to please come back and see the new, modern India.”

Sri Sri, who was the guest of honour at the event, underlined the Vishwa Sadbhavana event as ‘something noteworthy’ and said that the event has come at a time when the entire world is looking at modern India to bring peace across the globe.

“The event has come after 2 years of Covid-19 pandemic. In the past two years, there has been a lot of uncertainty, fear and violence in the world. At times like these, one needs hope of life and our Prime Minister is bringing that hope of life to every community, every section of the society, every religious group,” said the founder of Art of Living.

Sri Sri said that Sikh community has been the backbone of Indian culture and that everyone must try to imbibe the valour and compassion that is unique to Sikh community.

“In India, there is a thought, an idea prevalent in the society that a Sikh is the most reliable person. He will lay down his life but will protect you. The Sikh community has been at the forefront in serving society. Even if you see, Sikh community’s greetings ‘Sat Sri Akal’ is one of the greatest greetings. It calls for the Truth and Dharma to be maintained, and calls for us to believe in the power of the divine, and see this power of beauty and wisdom in everyone,” he added.

Sri Sri hailed the NID foundation for coming up with the book ‘Heartfelt: The Legacy of Faith’ which he said will bring to light to our society the great achievements of the current government, under the leadership of Prime Minister Narendra Modi.

“The book brings to the light some of the most landmark decisions of PM Modi for Sikh community which are long due which have been as depicted accurately in the book, be it the compensation to the victims of 1984 anti-Sikh riots or fulfilling the decades-pending demand of Sikh of opening the Kartarpur Corridor, be it translation of Guru Nanak Bani in 15 other languages to take Guru Nanak Dev Ji’s ideology and teachings to the masses or protection of Sikh heritage in Pakistan. I congratulate NID foundation and Satnam Singh Sandhu, who along with providing education to thousands of young people through Chandigarh University, have been spreading the spirit of Sadbhavana.”

“Let us all be united in Sadbhavana, have that oneness in our hearts and valour in our mind to face the challenges that we have in our world and help all those who are in need of help. Peace, both inner and outer, is our mantra. As held by all the 10 Sikh Gurus, there can’t be outer peace without inner peace,” said Sri Sri.

Speaking on the occasion, Ron Johnson noted that the US-Indo bilateral relationships have attained new depth and momentum ever since Prime Minister Narendra Modi has come to power in India.

“The USA has always considered India as its natural ally. There is so much that the two countries are doing together and will continue to do together. The two countries are continuously deepening the major defence partnership, encouraging economic engagement, and expanding the partnership on global health, pandemic preparedness, and critical and emerging technologies,” said the senior senator from Wisconsin.

Noting that freedom to its people and protection of their freedom by the State is essential for any country to become great, Johnson said that millions of people in both the countries- American and India have fought for, and have died defending that freedom.

“Indian community here contributes significantly in helping us build our nation, more peaceful and prosperous. Our relationship with India needs to be special and strong for a peaceful, and more free world,” he added.

S. Satnam Singh Sandhu, Chief Patron, NID Foundation hailed Prime Minister Modi as an illustrious leader, highly experienced strategist but above all a great humanist and expressed gratitude for the pro-Sikh decision under the current dispensation.

“The Prime Minister’s political and humane acumen have ensured that the role of Indian Diaspora in India’s pursuit of becoming a ‘Vishwa Guru’ (World Leader) again remains the most important. On every trip of any country, the Prime Minister takes out time to meet the Indian community there, to talk to them, interact with them and take stock of any problem or issues they might be facing. The spirit of Vishwa Sadhbhavana stems from this very love and respect that the hon’ble Prime Minister has for the people and humanity at the Global level,” he added.

Sandhu said that the book ‘Heartfelt-The Legacy Of Faith’ by the NID Foundation is an honest attempt at documenting the facts of the history of the Sikh community and the teachings and philosophies of the Sikh Gurus.

“It captures the virtues of Sikhism that are Satt, Santokh, Daya, Nimrata and Pyar, and goes on to show that the values and ethos of the country are not forgotten, rather they are being implemented in our governance model because of their universal and timeless relevance. Taking the five essential virtues of Sikh living as the central theme, the book connects the various initiatives taken by Prime Minister Shri Narendra Modi Ji for the cause and welfare of the Sikhs and the Punjab with the Sikh way of living, thereby highlighting the Prime Minister’s embodiment of upholding truthful values, compassion, humility, contentment, and love for all mankind,” he said.

Dr Debbie Ford, Chancellor, University of Wisconsin-Parkside, praised the efforts of the NID foundation for education and said that the opportunities given by the foundation to build new Partnerships between Universities around the world are precious as they give the graduates of the future the chance to learn from different cultures.

“The efforts in the direction of forging some of the very important partnerships for education, for the generations to come, are commendable,” added Dr Ford.

It may be mentioned here that the NID Foundation has been working tirelessly for nation building in various capacities. From implementing the new education policy to bringing Indian universities to the top positions at the international level, several decisive steps have been taken by the Foundation ever since its inception